Iconic Eats is Ben Luschen's series focusing on famed Oklahoma foods he's trying for the first time. If you have a suggestion for his next blog, email him at ben.luschen@TravelOK.com. All the fixings were laid out on the table for Ben's first trip to Eischen's Bar in Okarche. Photo by Nathan Gunter

We love the classics because they are cultural touchstones; shared experiences that often reveal to us something more, something deeper about our human condition. Though the term is mostly reserved for visual, literary, and cinematic works of art, the truth is lots of things can be considered classic. Cars can be classic. Music can be classic. The seasons can be classic. And, as it turns out, fried chicken can be classic too.

In March I will be celebrating my one-year anniversary at Oklahoma Today, though it still feels like I started the job last month. My time at the magazine has been an absolute blast, but before I can advance any further in my time here there are a few Okie culinary touchstones left for me to try. Don’t be fooled though, I’ve already had plenty of the staples. A burger at Nic's Grill and a Cattlemen’s steak in Oklahoma City. The famous Eskimo Joe’s cheese fries in Stillwater. Coney I-Lander and Brownie’s Hamburger Stand in Tulsa. Inevitably, though, some of the classics always sneak by you . . . which is what brought me this week to Eischen’s Bar in Okarche. Ben choosing his first piece of Eischen's Bar chicken. Spoiler alert: He went for the thigh. Photo by Greg Elwell

The world-renowned, fresh-fried chicken of Eischen’s seems nigh inseparable from the actual experience of ordering said chicken—excitedly waiting in the evening for maybe forty minutes or an hour with family or friends (and what must feel like the entire population of Okarche) for an open table. But when the Oklahoma Today editors pulled up to what may well be the state’s oldest bar at 3 p.m. on a Monday for a late lunch, we were lucky enough to be there for a rare downtime and immediately grabbed a table.

A server—one of many actual Eischens still on the staff of the family-owned establishment—took our drink orders quickly, and members of our party barely had enough time to peruse the gift shop before our order was ready: two full fried chickens and a large basket of crunchy fried okra, joined by the standard accompaniments of pickles, sweet onions, and sliced white bread. 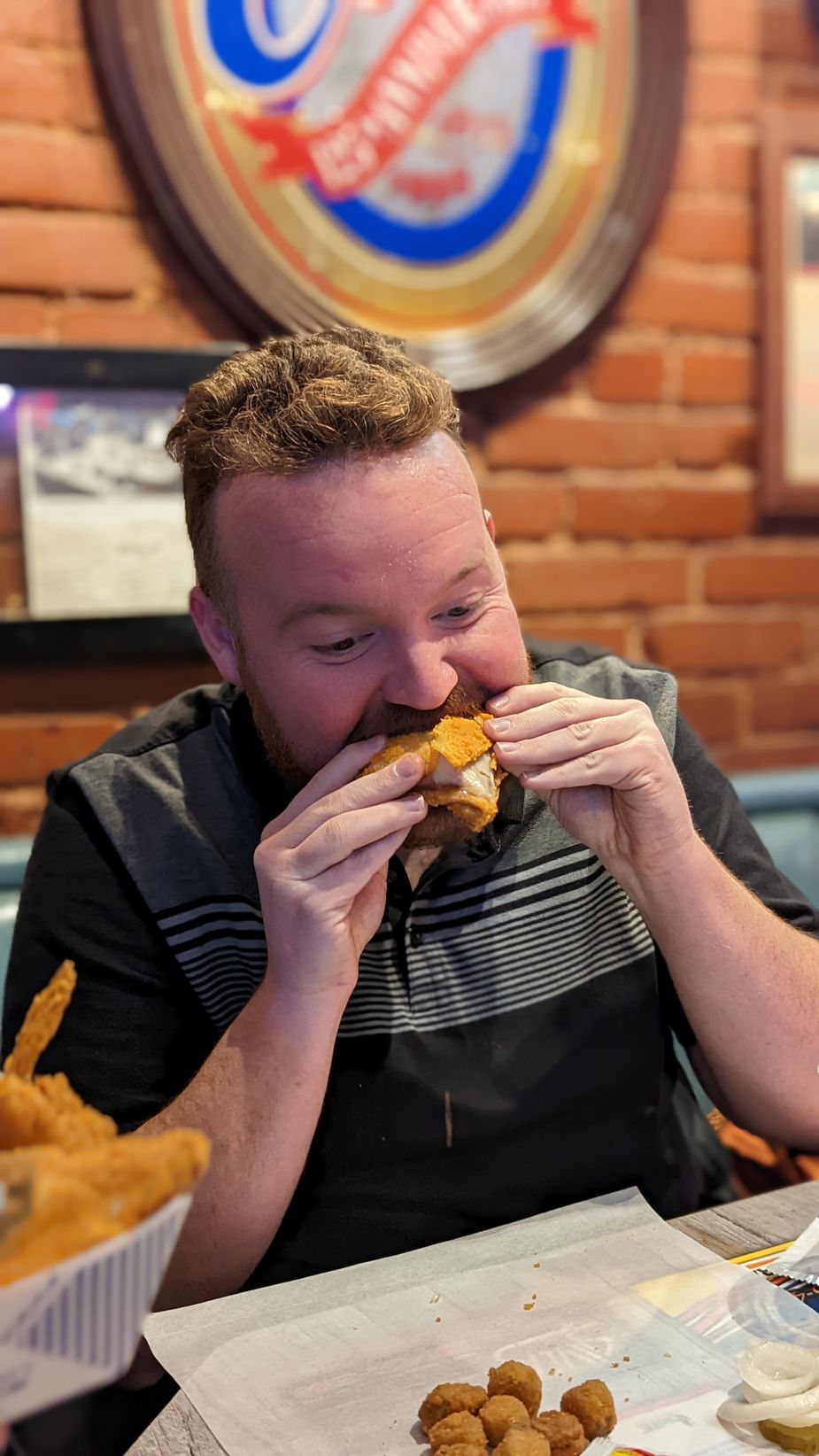 That first bite of Eischen's Bar chicken was hot, juicy, and golden. Photo by Greg Elwell

It seemed the whole table was waiting with bated breath as I grabbed a thigh and readied my first bite, like I was a baby about to mumble his first “Ma-Ma.” As I chomped my first Eischen’s chomp, my first thought was how truly fresh it was. If you’re accustomed to the standard fast-food offerings, it’s rare to ever taste the hot grease of a fried-to-order chicken. My second thought was how golden it tasted. The Eischen’s bird is not heavily spiced. Instead, what has made the flavor such a hit through the years is an emphasis on that fresh, crisp breading that imparts a light and pleasant buttery taste. As I chewed that first bite, I vaguely remember letting out an audible “Wow!” but I can’t be totally sure because I was still very much infatuated with the fried fowl. Guests can order condiments like barbecue sauce, ranch dressing, and hot sauce on request. I highly recommend requesting some honey to pair some sweetness with your savory, salty chicken.

As much as I loved the chicken, I was as or more taken by the free sides that came with it. Though the pickles and onions might seem superfluous at first glance, the fry cook encouraged me to make a fold-up sandwich with a piece of white bread and the brined garnishes. I am so happy I followed her suggestion. When combined, the onions and pickles (both sour dill and sweet bread and butter varieties) sang in beautiful harmony. I made at least four of those things, and perhaps more than that—throwing in a single piece of fried okra to the recipe for an irresistible texture bomb.

It’s true that my Eischen’s trip did not come on a rock ‘n’ roll Saturday night with friends, and maybe I lose some points for that. I did, however, leave thoroughly impressed, utterly stuffed, and confident in Eischen’s classic claim.

Classic comparison: Beethoven’s Ninth Symphony. Accessible with many attempts at replication, but full appreciation is not unlocked until you actually experience it firsthand.

Let Ben know which classic Oklahoma eats he needs to try next by emailing him at ben.luschen@TravelOK.com.