I’ve been lucky to always have a home, and in my forty-one years, I’ve had a lot of them: Apartments, lofts, houses, mobile homes, shack-sized dorm rooms, and, for half a year, a villa on Venice’s Grand Canal. When I was a kid, we lived just outside Weatherford near the airport, and I loved our house. But there was another building where I spent a huge amount of my childhood: The Chemistry-Pharmacy-Physics building on the campus of Southwestern Oklahoma State University.

My dad’s office was there—he taught Chemistry at Southwestern from the mid-1960s to the mid-1990s—and I loved being there with him. I got to play on his office computers, which were a succession of original Macintoshes. I got to explore the dark halls when no one was around—and when people were present, I got to eavesdrop on classes, observe college goings-on, and immerse myself in science. My friend Andy Frame and I would do chemistry experiments in the labs, and I’d spend hours wandering through the impressive collection of rocks and fossils in the lobby or among the preserved specimens-in-jars in the Biology building next door.

Growing up on a college campus nurtured my natural curiosity to near-insatiability, but nothing fired my science-loving neurons like learning about dinosaurs. Since I was six years old, I’ve been endlessly fascinated by stories of the enormous reptiles that once roamed the world, each a daring experiment in evolution, natural selection having suited animal to environment and vice versa. I loved their size, their variety, and the endless number of still-unanswered questions that came with every new discovery.

I could—probably should—author a listicle for this very website about the best places to encounter dinosaurs in Oklahoma, but for now, I’ll tell you about the most recent one I’ve encountered: the Jasmine Moran Children’s Museum in Seminole. You’ll read about this museum in all its wonder-sparking glory in our November/December issue, because the intrepid Greg Elwell is writing a story about it. Never having been there myself—and having recently added it to my ongoing Oklahoma Bucket List—I tagged along.

The museum is an absolute wonder—and not just for kids. In every corner is a place to learn about topics as far-ranging as aviation and engineering to banking, the judicial system, grocery stores, anatomy, and the conservation of angular momentum. Then, of course, there are the dinosaurs.

In the museum’s lobby is a cast of the skeleton of Acrocanthosaurus atokensis, a fearsome Early Cretaceous predator named for Atoka County, where it originally was discovered. Standing before this skeleton made me shiver; what must it have been like to stand this close to the actual animal, its nineteen curved, serrated teeth bared and ready to tear you apart? But proceed further into the museum, and the durn thing comes to life. A moving model of acrocanthosaurus is part of a traveling exhibit. Photo by Nathan Gunter

Near the rear of Jasmine Moran’s first floor, Cretaceous Oklahoma meets the now. Our first Mesozoic friend is a moving, life-size Acrocanthosaurus, baring its teeth and staring down every potential human-sized snack who walks past. She’s followed immediately by an animal that probably formed a lot of her diet: the Tenontosaurus, a distant relative of the more-famous duck-billed herbivores known as Hadrosaurs. Like Acrocanthosaurus, Tenontosaurus is known in part from remains found in the Antlers Formation here in Oklahoma, and her Jasmine Moran doppelgänger looms large and stares visitors curiously in the face as they amble past. Then suddenly, she rears up to her full standing height, and you realize that, vegetarianism aside, she wasn’t to be trifled with. Behind her, we find yet another Oklahoma-native dino: Deinonychus. This animal is the model for the velociraptors in Jurassic Park (real velociraptors were much smaller than those in the film), and like its roommates at Jasmine Moran, it roamed southeastern Oklahoma during the Cretaceous. It’s the smallest of the life-size animatronic recreations at the museum, but somehow, it’s also the scariest. Its eyes seem to watch you, and it’s hard to escape decades of Jurassic content reminding us how bloodthirsty a hunter it was. Not a veloceraptor, but a deinonychus is among the dino models traveling through the Jasmine Moran Children's Museum. Photo by Nathan Gunter

Near the museum’s entrance, there’s also a mock Tenontosaurus skeleton buried in a sandbox, an exhibit that gives kids a chance to have their very own paleontological dig. My nephew, Knox, is seven and has been obsessed with dinosaurs (I’m so proud) for awhile now, so I plan on bringing him and his sister Greer to Jasmine Moran as soon as I can. They may not get to grow up around lab equipment and preserved specimens like their dad and I did, but a trip out to Seminole to see this unbelievably fun museum will, I hope, spark curiosity and wonder that’ll stay with them their whole lives. 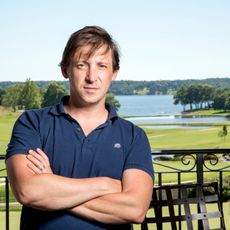 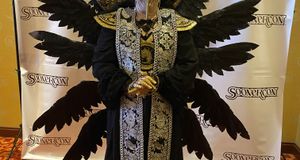