Detroit-style pizza is capturing the hearts and stomachs of Oklahoma’s foodies. Plus: wild pizza toppings from across the state.

Pizza is often defined not by what is on it, but where it comes from. New York. Chicago. Napoli. Rome. St. Louis. Even Grandma’s kitchen gets a shoutout.

The results vary widely, as do the arguments about what does and does not constitute “real” pizza, and yet they all coexist under the same banner. Now a new-ish contender has entered Oklahoma’s always-contentious pizza market from, of all places, Michigan.

“I discovered Detroit-style pizza in the early ’80s when I was living in Ann Arbor, and one of my buddies from home was living in Detroit,” says Rendezvous Pizza owner Buck Warfield. “So we went into Buddy’s Rendezvous, and it’s just, ‘Wow!’ Pretty soon, every time I’d go to Detroit, I’d end up in Buddy’s for a bite.”

Warfield’s restaurant career is wide-ranging, from managing major chains to creating fine-dining spots, but for the last several years, he’s overseen a renaissance at Oklahoma City-based Bricktown Brewery. Even as that restaurant group saw success spreading throughout the state and growing into the region with eighteen locations in Oklahoma, Texas, Missouri, Kansas, and Arkansas, the man in charge was thinking about bringing Detroit-style pies to his new home state. 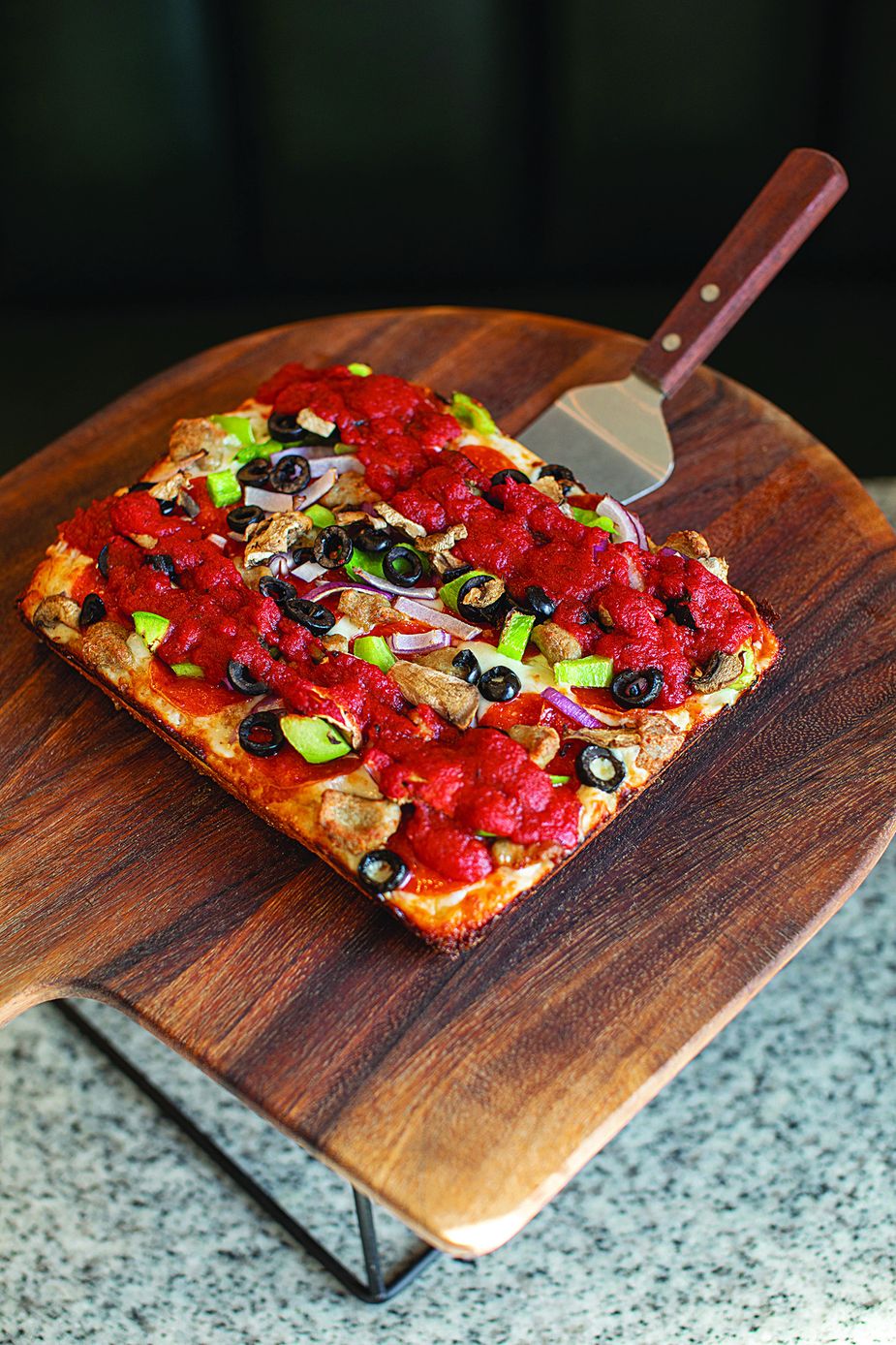 The Cadillac at Pizza 313 in Tulsa puts other supreme pies in their place with red sauce, Italian sausage, pepperoni, green peppers, mushrooms, onions, and black olives. Photo by Valerie Wei-Haas

Detroit-style pizza is similar to Sicilian-style pizza made in heavy, deep, square pans. As the story goes, Buddy’s owner got them from a friend who worked in a factory where they were used to hold spare parts. Paired with an airy dough that puffs up into a pillow-like texture, the oiled pan fries the outer crust in an armor of crispy cheese. Though not as well-known as New York- and Chicago-style pies, the Detroit variety has been gaining momentum as restaurateurs look for new ways to sate pizza-crazed customers.

Doug Morrison wasn’t looking to get into the restaurant business until his friend Bryan Nunneley took him by the Shops of Seville in Tulsa, and the pair envisioned the perfect pizza parlor. But it needed a hook.

“We were watching the trends, and it seemed like Detroit-style was winning all of the pizza competitions,” says Morrison, who now co-owns Pizza 313 in Tulsa with Nunneley.

Everyone loves pizza, but Detroit-style pies are still new to Oklahomans, so Morrison wasn’t sure how well it would go over. Turns out the answer is really well.

“Probably 85 percent of our business is Detroit,” he says. “We did not think it would be that way, but it has turned out to be a crowd favorite.”

Oddly, the pizza he wasn’t sure of himself has turned into one of his biggest draws: The Smokey Robinson.

“I’m not a barbecue chicken fan, but there’s just something about that pizza,” he says.

“There’s just something about the way the onions turn out that gets me,” he says.

As for the restaurant’s name, it’s a tip of the hat to the city that made the place possible—Detroit’s 313 area code.

With its satisfyingly crispy exterior surrounding fluffy, buttery crust, Detroit-style pies are a bread lover’s dream. And as the trend continues to take hold in Oklahoma, pizza fans don’t need to wake up anytime soon.

As delicious as pepperoni and Italian sausage are, pizza is a canvas for all sorts of different flavors. These four pizzerias across the state go the extra mile with toppings that won’t be found at any of the national chains.

When Oklahoma City’s Pizzeria Gusto first opened, the menu didn’t even include pepperoni, opting for the more traditional cured Italian meat, soppressata. While the restaurant has since relented, it continues to spotlight toppings that might seem out of place in a pizza joint were they not so delicious. Roasted butternut squash, with its mild sweetness and creamy texture, is paired with roasted peppers, caramelized onions, and a blend of mozzarella and provolone cheeses for a pie that is decidedly gourmet. 2415 North Walker Avenue in Oklahoma City, pizzeria-gusto.com

With locations in Oklahoma and Colorado, Fat Boys Pizza is happy to load customers up with classics like mushrooms, anchovies, and black olives. But for taste buds that have grown tired of the same-old same-old, there is the Pickle Pizza. With ranch dressing for sauce and a blend of bacon and pickles, it’s a salty and savory delight.* 8209 U.S. Highway 277 in Elgin and 2546 Fort Sill Boulevard in Lawton,* fatboyspizza.com

Pizza is most often paired with other Italian foods, but leave it to Enid’s A Fuego Pizzeria to work in some Latin American flavors. In addition to Puerto Rican dishes like mofongo and tostones, this beloved eatery also uses chorizo to spice up the pies. Keep an eye on their Facebook page for other specials, including more Puerto Rican dishes. 1518 East Broadway Avenue in Enid, facebook.com/afuegopizzeria

Even as related restaurants pop up across and around the state, Stillwater’s The Hideaway is still the original and proving it with a very original menu. Roast beef, green olives, and spinach aren’t unheard-of on a pizza, but pickled sweet-and-spicy Peppadew peppers are a bit of a surprise. Look for these vibrant red peppers of South African origin to add a sweet and juicy pop that can cut through the richness of traditional pizza meats and cheeses. 230 South Knoblock Street in Stillwater, thehideaway.net

As Oklahoma's own The Gap Band sang, "You dropped a bomb on me." Check out the latest explosive Tuesday Trivia now!