Get Twisted! Let Wakita's Twister The Movie Museum blow you away with movie memorabilia.

In 1995, Hollywood hit the town of Wakita. But the production of the blockbuster smash Twister left opportunity in its wake.

Most tornadoes leave only destruction behind. But the cinematic storm that struck Wakita in the summer of 1995 did just the opposite.

Following a devastating hail storm in 1993, the small Grant County community faced economic hardship, roads in need of repair, and a host of dilapidated buildings. 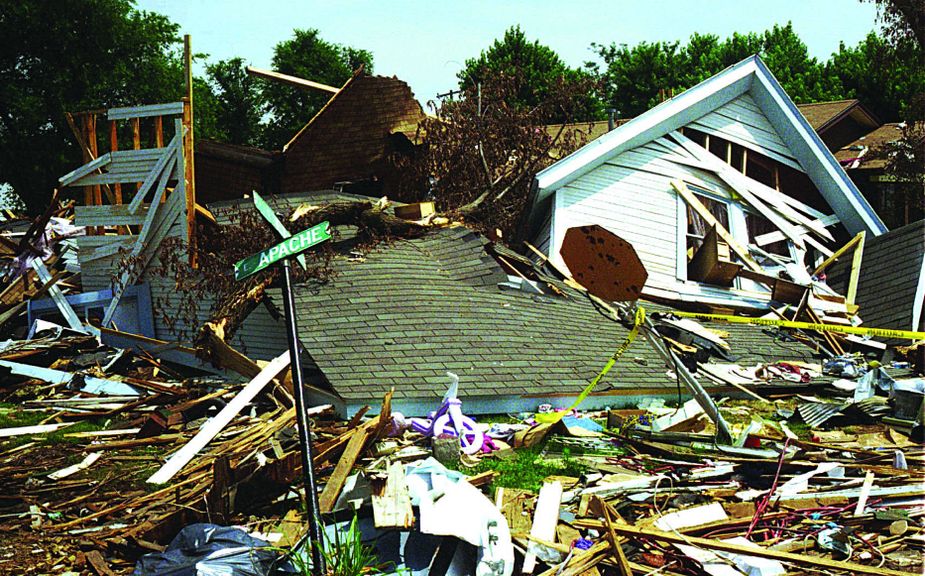 In "Twister," Aunt Meg, played by Lois Smith, lived in Wakita, where her home was destroyed by an F5 tornado.

“After the hail, Wakita was in the process of tearing down buildings and cleaning up roofless, unoccupied spaces to rid itself of the derelict atmosphere the damage had created,” says Linda Wade, director of the Twister The Movie Museum.

Less than two years later, Hollywood came calling with a solution to Wakita’s problem: a little movie magic to make it appear the town had been leveled by an F5 tornado. For residents, it was a surreal experience to see their hometown torn apart, even if the damage was only fictional.

“I lived a block from Aunt Meg’s house, which was completely destroyed,” says Douglas Conrady, Wakita’s former mayor. “They brought in portable stadium lights to create artificial lighting and jet engines to recreate the wind noises. It was chaotic.”

Before they withdrew, the film’s producers paid to restore old buildings and repave roads badly in need of repair.

Wakita’s citizens also pitched in. After filming wrapped, the Wakita Garden Club began displaying items from the movie, including one of the Dorothy machines used in the film, behind-the-scenes footage of the cast, and information on real storms and people who chase them. The result, the Twister The Movie Museum, has attracted thousands of guests over the years.

“It drew people to our town,” Wade says. “That meant they were buying our gas and eating in our restaurants.”

In addition to the civic improvements, Twister’s legacy can be seen in signposts around Wakita that mark important places in the movie.

“Before the film, we had very little contact with people from other nations,” Wade says. “Since then, we’ve had visitors from Australia, Russia, Germany, and every state in the union.”

Get There
Twister The Movie Museum, 101 West Main Street in Wakita, (580) 594-2312 or twistercountry.com
Written By
Karlie Ybarra